Bridging gaps: A day at the Roshan Aaj Library 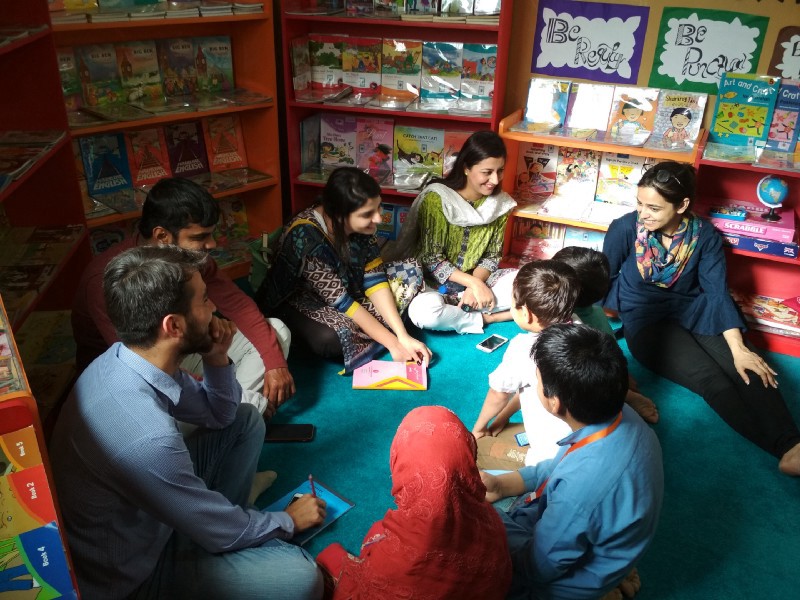 On a warm and pleasant afternoon, Dhok Hassu — an urban slum situated on the northern outskirts of Rawalpindi, was bustling with activity. From chinchis ricketing along the small road, to street hawkers chanting their slogans and school children huddling together mischievously, the area seemed extremely chaotic, yet synchronized at the same time. Although Akhter Hameed Khan Resource Center (AHKRC) is situated in the midst of this slum, but the atmosphere here was contrasting to its neighborhood. The blaring horns were muffled and barely audible due to the residential nature of the surrounding area.

It was 2 P.M. and the children started to gradually walk into the small building known as the “Roshan Aaj Library and Learning Center”. This facility is part of an ongoing project of AHKRC, in collaboration with the Public Affairs Section of the US Embassy, which provides tutorship to children in English and Computer studies. On this day, a special mentorship session was being conducted by Ms. Joveria Hassan, an Assistant Professor at NUST University, accompanied by 10 of her students. They had come along to teach digital storytelling to these underserved children belonging to Dhok Hassu.

Children sharing their stories with the mentors

The day started off with introductions and small talk between the two parties. The children were initially shy and wary in participating with the new mentors. This led to an ice-breaking session, which consisted of 5 groups, and each group was led by 2 students of NUST. In order for the children to get used to their mentors, each group formed a story-telling circle. A child of no more than 8 years old, Riaz narrated a wonderful story about warmth and empathy. He was rewarded with a round of applause and cheering by his group.

Umer wrote a story about his old school and how he was not happy with his peers. He described the struggles he faced and how he overcame them to eventually join a new school. Ms. Joveria also participated in the activity by sharing her personal anecdotes, which helped motivate the other children to be more vocal. The mentors shared their feedback and gave them ideas on how to improve their storytelling capabilities.

The next activity was very well-received by the kids. It involved the use of digital tablets, and when they were being distributed, each child’s face gleefully lit up. The mentors guided their groups on the functionality of the tablets and every child was given the opportunity to participate. They were taught how to take photos and record moments. Later on, the kids went out together to digitally capture objects of interest in their communities, such as the small wooden fence near the facility. Other than that, some children even posed for the camera.

Asma learning how to capture photos with a tablet

Around 4:30 P.M, the mentors initiated the final activity for the day. Each mentee was instructed to share the concept of their stories and what lessons they had learnt during the day. The students of NUST filmed this feedback, which helped the children to develop the confidence to talk in front of the camera. Nabeela, who was extremely timid at the start of the workshop, shunned her fearful demeanor and happily exclaimed about how she wanted to be a photographer when she grew up. Seema mentioned how she had learnt to work in a group and give respect to people who had a different background than hers.

Maheen sharing her story for the digital recording

Time flew by so quickly that the event wrapped up half an hour after the scheduled time. All of the participants huddled together for a farewell picture outside the library. Farewells and goodbyes were exchanged and the mentors took their leave. The children kept on excitedly chattering about the activities of the day and the energy did not ebb out till the last child left the facility.

Mentors and mentees gathered together for a group photo

If you’d like to donate or get involved for supporting education of underprivileged children in Dhok Hassu, reach out at library@ahkrc.org.