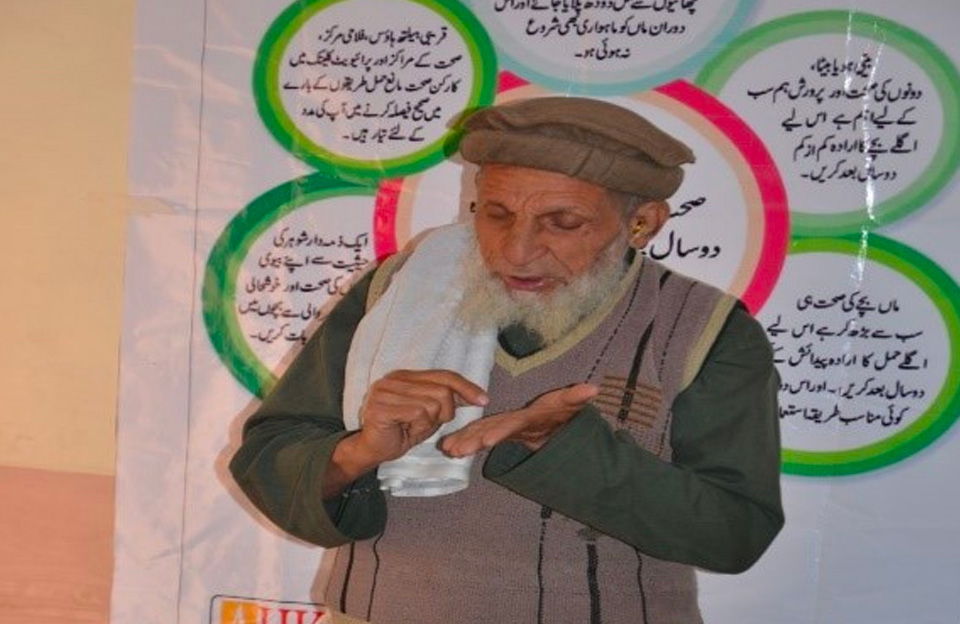 Having served in my role as an Imam (religious leader) of the mosque here in Dhok Hassu for the past 10 years, I am approached regularly with questions regarding the correct ways to carry out day-to-day tasks according to the principles of Islam. However, I am usually approached by only the male members of our community; the women almost never come to ask me for guidance. I never used to think about this cultural barrier that restricted women from seeking religious guidance from qualified Imams, but lately this issue has been a lot on my mind.

I first learned of the PPIF-AHKRC “Noor Aapis” program from my daughter Asifa, who had received family planning counseling from one of the Aapis at her home. Asifa confessed to me that she herself had had little idea about the negative consequences of poor family planning, and had always shied away from even discussing the topic with her husband because she thought family planning was prohibited in Islam. This made me realize that there was a huge communication gap in our religious circles wherein women-and most men-fell prey to the myths and misconceptions prevalent in the society.

After I heard about the program from my daughter, several other members of our mosque also approached me to ask me about the dictates of Islam regarding family planning. I told them all what I told my daughter; family planning was not prohibited in Islam if further pregnancies could pose a threat to the life of mother and child. Family planning is actually encouraged in these cases because they are for the safety of both mother and child. I also learned that some people were not using any family planning methods, but were getting abortions to get rid of their unwanted pregnancies. It must be noted that in Islam even abortions are allowed, as long as the pregnancy is fatally dangerous to the mother. However, having abortions for any other reason are not allowed, as it is written in the Qur’an:

“Do not kill your children for fear of poverty: We give them sustenance and yourselves (too): surely to kill them is a great wrong.”

Since talking to various members of the community, I have started to realize the importance of promoting dialogue and discussion within the community on such important issues. I have attempted to talk to people myself regarding topics that I otherwise might have avoided. The cultural environment in our community still largely blocks the communication path between the women and the Imams but I have started to urge the male members of the mosque to talk to their female family members and dispel any misconceptions they might have.

The PPIF and AHKRC program had a huge impact on my way of thinking and perceiving my community, and inspired me to do more as well. It has also prompted people to start asking questions rather than accepting things just as they are. It is especially interesting to note that they are not targeting only women, men are being included in the discussion as well. Traditionally men were not very concerned about these topics, but they have recently gotten interested and approach me as well. I hope the program does well in achieving its target of promoting family planning across the community.

Prophet Muhammad (peace be upon him) has sternly advised his followers:

“The best of you is he who is best to his family and I am the best among you to my family.”